Tuscaloosa spent the remainder of the year alternating in underway and upkeep periods. On 4 January 1971 she began duty off the coast of California as a test ship evaluating sensors on John C. Calhoun (SSBN-630).

She continued a rigorous training schedule out of San Diego, her home port, into the spring when she prepared for a deployment to the Western Pacific. The tank landing ship loaded a cargo of Quonset hut components and a tank-deck load of LVT's (Landing Vehicle Tracked), tanks, and heavy construction vehicles and departed the West Coast on 18 May 1971.

Arriving at Okinawa on 1 June, Tuscaloosa unloaded and proceeded, via Subic Bay, Philippines, to Da Nang, South Vietnam. After taking on a cargo of Marine Corps equipment she returned home to San Diego on 6 July and began an extensive post-shakedown availability which lasted into the fall. On 1 October Tuscaloosa got underway for a seven-month WestPac deployment in company with Amphibious Squadron 5; Tripoli (LPH-10), Duluth (LPD-6), Anchorage (LSD-36), Mobile (LKA-115) and Schenectady (LST-1185).

For the remainder of the year, the landing ship conducted exercises and operations in the Philippines and off Okinawa. She operated with marines, took part in amphibious exercises and ended the year at Sasebo, Japan.

The Tuscaloosa got underway for the Ryukyus on 4 January 1972 but was delayed by a collision with a Japanese patrol craft. The next day, after an informal investigation ascertained that she had not suffered any damage, she resumed her voyage to Okinawa where she embarked marines and transported them to Yokosuka, Japan. Following repairs to her bow doors, the ship sailed for the Philippines and arrived at Subic Bay on 16 February. There she loaded a cargo of generators and delivered them to Vung Tau, South Vietnam.

Tuscaloosa returned to Japan soon thereafter, transporting marines and equipment, before she headed back to the Philippines for amphibious exercises. Then, upon completion of these exercises, Tuscaloosa got underway in company with the Mobile and Denver, and proceeded via Okinawa to Vietnamese waters, arriving on "Yankee Station" in the Tonkin Gulf on 6 April. She remained on station until 3 May when she proceeded, via Da Nang, to Subic Bay. Tuscaloosa subsequently returned to Vietnam and operated both at Da Nang and on "Yankee Station" until late May.

The LST next supported Thailand contingency operations by transporting Marine Corps equipment and Navy construction battalion tools. She then returned to Subic Bay and pressed on to the United States at the end of her 10-month deployment.

Tuscaloosa engaged in local operations and amphibious exercises off the California coast into mid-1973 before she again deployed to WestPac on 29 August, her holds filled with Project Handclasp material for delivery to communities in the Philippines. Tuscaloosa later participated in Operation Pagasa II in conjunction with units of the Philippine Navy and operated out of Subic Bay for the remainder of the year with calls at Hong Kong and Kaohsiung, Taiwan on her itinerary.

Commencing 1974 with exercises with Korean naval units in Operation Fly Away, Tuscaloosa visited Keelung, Taiwan, in late January, before departing Okinawa on 11 February 1974 and returning via Pearl Harbor to the west coast of the United States. The next major item on Tuscaloosa's agenda was a major overhaul by the Todd Pacific Shipyards at Seattle, Washington, which began on 9 July.

On 3 August an 11-man rescue and assistance party from the ship assisted Moctobi (ATF-105) in rescuing USNS Lipan which had collided with another vessel in the Strait of Juan de Fuca and lay dead in the water in danger of sinking. Prompt salvage efforts over a three-day period enabled Lipan to return to port for repairs.

After Tuscaloosa's own repairs and overhaul had been completed she rejoined the fleet on 12 December and operated along the California coast into the spring of 1975. She again deployed to WestPac on 1 April getting underway from San Diego in company with two Korean mine craft and Barbour County (LST-1195) for Pearl Harbor and Okinawa.

While Tuscaloosa and her three consorts sailed westward, the situation in Southeast Asia deteriorated rapidly. Both the South Vietnamese and Cambodian governments were tottering and their forces falling back under the onslaught of communist troops. Tuscaloosa arrived at Pearl Harbor on 6 April and proceeded on toward the Ryukyus on the same day. Arriving at Okinawa on the 18th, the LST's crew urgently offloaded her cargo and pressed on the next day for Subic Bay. After a full-power run, she arrived there on the 21st and embarked 280 stragglers who had been unable to return to their ships - Enterprise (CVAN-65), Midway (CVA-41) and Hancock (CVA-19) - when the carriers pulled out hurriedly to participate in Operation Frequent Wind, the evacuation of Saigon.

Tuscaloosa now turned-to in order to support Operation New Life escorting 26 former South Vietnamese Navy ships to the Philippines. During the seven-day passage she provided over 200 pallets of food and medical supplies per day and earned the Meritorious Unit Commendation while thus engaged. In addition, she sent salvage and repair parties to various ships to effect any repairs necessary to keep the less seaworthy Vietnamese ships afloat. Two craft were evacuated and sunk by gunfire from Tuscaloosa to eliminate possible hazards to navigation. In addition, four Vietnamese craft were temporarily taken over by the United States Navy and placed under the command of four officers from Tuscaloosa.

From Subic Bay, Tuscaloosa proceeded to Okinawa and, upon arrival there, was ordered to make best possible speed for the Gulf of Thailand. Four days later, when nearly at her destination, she was ordered to turn back. The evacuation of the area had been completed and her services were no longer needed. Thereafter the LST continued routine operations during this WestPac deployment before returning to the west coast of the United States on 17 November 1975.

She conducted another deployment to the Western Pacific during the period 29 March to 17 November 1977 and spent the period 3 February to 10 December 1978 in regular overhaul at San Diego.

In December 1989, the Tuscaloosa with Marines from Alpha Company 1st Battalion, 3rd Marines responded to the Coup attempt in the Philippines.

USS Tuscaloosa was decommissioned 18 February 1994. The Tuscaloosa is tied to a mooring ball in Middle Loch at the Naval Inactive Ship Maintenance Facility in Pearl Harbor under the Amphibious Enhancement Plan. This vessel has been striken from the Naval Register. Its final fate is unknown. The plan will ensure adequate amphibious lift capability in a crisis. Along with the Tuscaloosa, LSTs Fresno (LST-1182), Boulder (LST-1190) and Racine (LST-1191) will be retained as mobilization assets until FY09 according to the Amphibious Ships and Landing Craft Data Book published by the Marine Corps Combat Development Command in Quantico, Virginia. 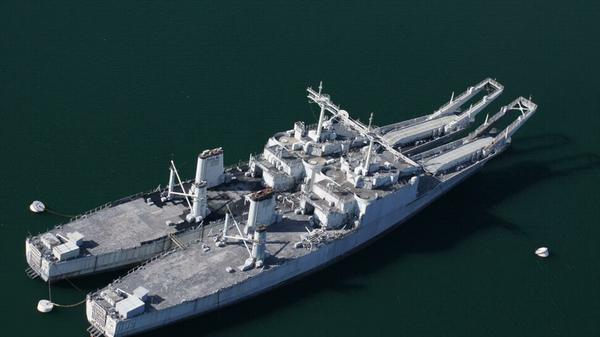 Provided by Wikipedia and navsource.org